MyM is an integrated environment for the development, visualization and application of simulations of dynamic systems.


MyM comprises a mathematical formalism, a simulator that solves the equations and handles data management and a graphical interface to define input scenarios, to inspect model results and to document and present the model itself.

If you want to get an idea of what MyM can do and how it can be used to create, visualize and demonstrate a simple simulation model, the best way to learn more is to take this short Quick Tour

MyM is being used by an increasing number of teams of scientists to develop national and global models of public health and the environment, such as IVM and TARGETS. MyM is also succesfully used to build user interfaces for existing models such as IMAGE 2.1.
The most recent models developed in MyM are: FAIR, IMAGE USS, Phoenix, Dimitri, Safe Landing Analysis for IMAGE, TARGETS. GISMO, MiASMA, and Timer. 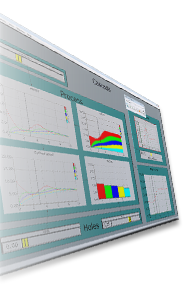